The following is a press release from SAMSHA regarding the U.S. Transition to 988 Suicide & Crisis Lifeline : 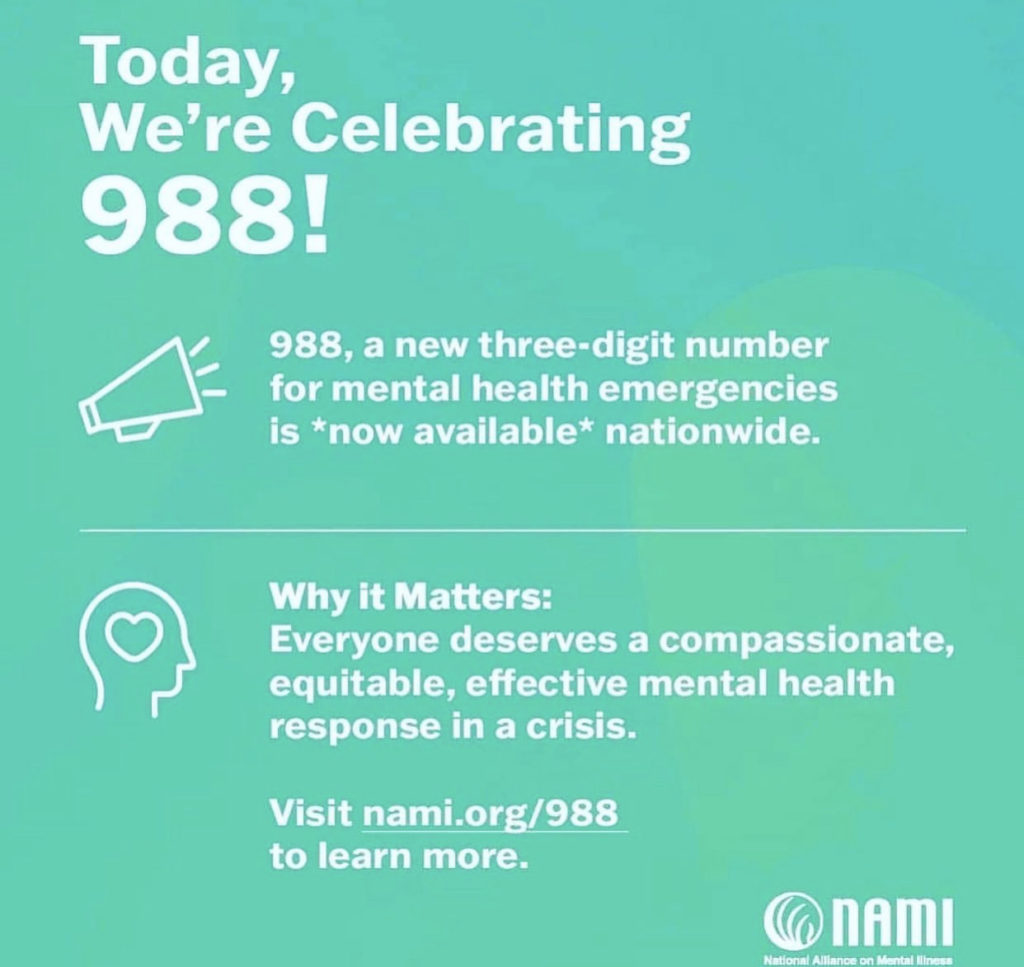 Friday, July 15, 2022
On Saturday, the U.S. will transition the 10-digit National Suicide Prevention Lifeline to 988 – an easy-to-remember three-digit number for 24/7 crisis care. The lifeline, which also links to the Veterans Crisis Line, follows a three-year joint effort by the U.S. Department of Health and Human Services (HHS), Federal Communications Commission (FCC), and the U.S. Department of Veterans Affairs (VA) to put crisis care more in reach for people in need. This initiative is part of President Biden’s comprehensive strategy to address our nation’s mental health crisis, and is identified by U.S. Health and Human Services Xavier Becerra as a top priority at HHS. Since January 2021, the Biden-Harris Administration has made unprecedented investments to support the 988 transition, investing $432 million to scale crisis center capacity and ensure all Americans have access to help during mental health crises.

The National Suicide Hotline Designation Act, signed into law after the passage of bipartisan legislation in 2020, authorized 988 as a new three-digit number for suicide and mental health crisis. All telephone service and text providers in the U.S. and the five major U.S. territories are required by the FCC to activate 988 no later than July 16.

“988 is more than a number, it is a message: we’re there for you. Through this and other actions, we are treating mental health as a priority and putting crisis care in reach for more Americans,” said Secretary Becerra, who has been meeting with states across the country about the transition to 988 as part of HHS’ National Tour to Strengthen Mental Health. “There is still much work to do. But what matters is that we’re launching, 988 will be live. We are looking to every governor and every state in the nation to do their part to make this a long-term success.”

The Biden-Harris Administration increased federal investments in the 988 Suicide & Crisis Lifeline by 18-fold – from $24 million to $432 million — to scale up crisis centers and back-up center capacity, and to provide special services, including a sub-network for Spanish language speakers.

The $432 million included $105 million in grant funding to states and territories, provided by the American Rescue Plan, to improve response rates, increase capacity to meet future demand, and ensure calls initiated in their states or territories are first routed to local, regional, or state crisis call centers. Prior to this investment, the Lifeline, which has existed since 2005, had been long unfunded and under-resourced.

The 988 Suicide & Crisis Lifeline is a network of more than 200 state and local call centers supported by HHS through the Substance Abuse and Mental Health Services Administration (SAMHSA).

“Recent investments made in the Lifeline have already resulted in more calls, chats, and texts answered even as volume has increased, but we know that too many people are still experiencing suicidal crisis or mental health-related distress without the support they need,” said Miriam E. Delphin-Rittmon, Ph.D., the HHS Assistant Secretary for Mental Health and Substance Use and leader of SAMHSA. “Over time, the vision for 988 is to have additional crisis services available in communities across the country, much the way emergency medical services work. The success of 988 depends on our continued partnership with states, as the federal government cannot do this alone. We urge states and territories to join us and invest further in answering the call to transform our crisis care response nationwide.”

FCC staff first proposed 988 in a report to Congress in August 2019 as the nationwide, easy-to-remember, 3-digit dialing code for individuals in crisis to connect to suicide prevention and mental health crisis counselors with the National Suicide Prevention Lifeline. On July 16, 2020, the FCC adopted rules designating 988 for this purpose. Recognizing the need to better support at-risk communities in crisis, including youth and individuals with disabilities, the FCC adopted additional rules in November 2021 to expand access to this important service by establishing the ability to also text 988.

“All across our country, people are hurting. They need help. The good news is that getting that help just got a lot easier. Starting tomorrow, 988 will be available nationwide for individuals in crisis, and their loved ones, to reach the 988 Suicide & Crisis Lifeline more easily,” said FCC Chairwoman Jessica Rosenworcel. “This cross-government effort has been years in the making and comes at a crucial point to help address the mental health crisis in our country, especially for our young people.”

“988 has been a long time coming and will serve as a critical resource during a crisis when every second counts. The new, shorter number will help ensure Veterans have easier access to the Veterans Crisis Line,” said VA Secretary Denis McDonough. “This launch is a whole-of-government approach in line with the President’s call to prioritize mental health by strengthening access to crisis services, and preventing Veteran suicide, our top clinical priority.”

In 2021, the Lifeline received 3.6 million calls, chats, and texts. That number is expected to at least double within the first full year after the 988 transition.

The U.S. had one death by suicide every 11 minutes in 2020, according to the Centers for Disease Control and Prevention. Suicide was the second leading cause of death for young people aged 10-14 and 25-34. From April 2020 to 2021, more than 100,000 people died from drug overdoses. Studies have shown that after speaking with a trained crisis counselor, most Lifeline callers are significantly more likely to feel less depressed, less suicidal, less overwhelmed, and more hopeful.