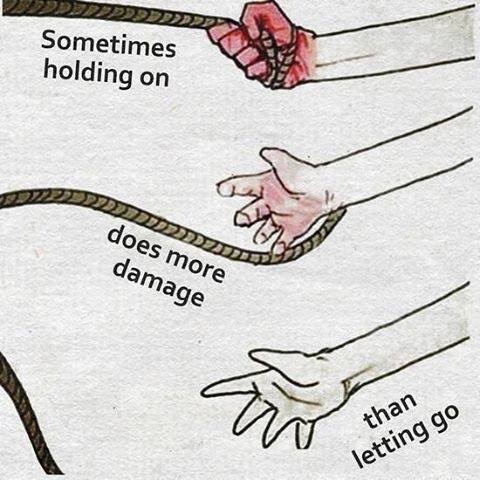 Sometimes holding on really does do more damage than letting go. To “let” can be defined in several ways including:

1. To give permission or opportunity to; allow: I let them borrow the car. The inheritance let us finally buy a house.
2. To cause to; make: Let the news be known.
3. a. Used as an auxiliary in the imperative to express a command, request, or proposal: Let’s finish the job! Let x equal y. b. Used as an auxiliary in the imperative to express a warning or threat: Just let her try!
4. To permit to enter, proceed, or depart: let the dog in.
5. To release from or as if from confinement: let the air out of the balloon; let out a yelp.
6. To rent or lease: let rooms.
7. To award, especially after bids have been submitted: let the construction job to anew firm.
8. To become rented or leased.
9. To be or become assigned, as to a contractor.”
The definitions above all include intentionality. It requires intentionality and willingness to let go or release oneself from a burden. The operative meaning  in many of these descriptions above is to “allow”. When we are able to allow ourselves to move on from the damaging influences in our lives, we find ourselves letting go, and perhaps, just a little bit freer.
For more great quotes and sayings, please join us on the Aspira Continuing Education Twitter Page
For more on this and other mental health topics, please browse some of our courses at Continuing Education for Social Workers or Law and Ethics CE Course