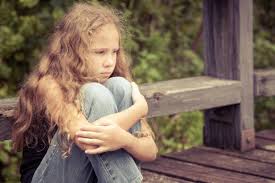 Poverty linked to childhood depression, changes in brain connectivity. What do you think of this article from The Washington University School of Medicine?

“Many negative consequences are linked to growing up poor, and researchers at Washington University St. Louis have identified one more: altered brain connectivity.

Analyzing brain scans of 105 children ages 7 to 12, the researchers found that key structures in the brain are connected differently in poor children than in kids raised in more affluent settings. In particular, the brain’s hippocampus — a structure key to learning, memory and regulation of stress — and the amygdala — which is linked to stress and emotion — connect to other areas of the brain differently in poor children than in kids whose families had higher incomes.

Those connections, viewed using functional MRI scans, were weaker, depending on the degree of poverty to which a child was exposed. The poorer the family, the more likely the hippocampus and amygdala would connect to other brain structures in ways the researchers characterized as weaker. In addition, poorer preschoolers were much more likely to have symptoms of clinical depression when they reached school age.

The study is available online Friday, Jan. 15, in The American Journal of Psychiatry.

“Our past research has shown that the brain’s anatomy can look different in poor children, with the size of the hippocampus and amygdala frequently altered in kids raised in poverty,” said first author Deanna M. Barch, PhD, chair of Washington University’s Department of Psychological & Brain Sciences in Arts & Sciences, and the Gregory B. Couch Professor of Psychiatry at the School of Medicine. “In this study, we found that the way those structures connect with the rest of the brain changes in ways we would consider to be less helpful in regulating emotion and stress.”

Those changes in connectivity also are related to a risk of clinical depression. Those in the study who were poor as preschoolers were more likely to be depressed at age 9 or 10.

Previous research from the same group of investigators had identified differences in the volume of gray matter and white matter, and the size and volume of the hippocampus and amygdala. But they also found that many of those changes could be overcome through nurturing from parents. That wasn’t true, however, regarding changes in connectivity identified in the new study.

“Poverty is one of the most powerful predictors of poor developmental outcomes for children,” said co-investigator Joan L. Luby, MD, the Samuel and Mae S. Ludwig Professor of Child Psychiatry and director of Washington University’s Early Emotional Development Program. “Previously, we’ve seen that there may be ways to overcome some brain changes linked to poverty, but we didn’t see anything that reversed the negative changes in connectivity present in poor kids.”

The researchers measured poverty using what’s called an income-to-needs ratio that takes into account a family’s size and annual income. The current federal poverty level is $24,250 for a family of four.

Children raised in poverty tend to have poorer cognitive and educational outcomes and are at higher risk for psychiatric illnesses, including depression and antisocial behaviors. Researchers hypothesize that factors such as stress, adverse environmental exposures — including lead, cigarette smoke and poor nutrition — along with limited educational opportunities, can contribute to problems later in life.

But Barch emphasized that the link between poverty and poor outcomes doesn’t necessarily lock a child into a difficult life.

“Many things can be done to foster brain development and positive emotional development,” she said. “Poverty doesn’t put a child on a predetermined trajectory, but it behooves us to remember that adverse experiences early in life are influencing the development and function of the brain. And if we hope to intervene, we need to do it early so that we can help shift children onto the best possible developmental trajectories.”

What do you think of this article: “Poverty linked to childhood depression, changes in brain connectivity”?

Disclaimer: Aspira CE is not responsible for the accuracy of news releases posted to EurekAlert by contributing institutions or for the use of any information through the EurekAlert system.